When I saw Frozen River last January at Sundance, it knocked me out. IMDB I'd been a Melissa Leo fan since she played Det. Sgt. Kay Howard on Homicide: Life on the Street. We became friends through the Woodstock Film Festival, and I adore Racing Daylight, her movie with David Strathairn that has yet to get theatrical distribution. When I saw Frozen River (FR), I discovered that when an actress who's also a friend appears on screen, it's doubly interesting because you're rooting for her, and you want her to be great, and you know she can be great. I saw the drama about two struggling single mothers forging a friendship while smuggling on the NY-Canadian border, and I literally wept in two ways. I wept because this particular story moved me emotionally but, also, to watch someone you love create a work of art is extremely affecting. And, over the process of becoming an advocate for FR that week in Park City, I bumped into Michael Barker and Tom Bernard of Sony Pictures Classics at a screening. I told them they had to see FR: it's tremendous, I told them; it's adult and has Melissa Leo, you know her from 21 Grams and The Three Burials of Melquiades Estrada, and she should be on the Oscar track. And, by festival's end, not only had Michael and Tom bought FR, but Quentin Tarantino and the jury awarded it best narrative feature and it went on to open New Directors/New Films at MOMA. Last month, I sat down beside Melissa for a chat:

Round lake was a lovely community of Victoiran cottages circling out from a gorgeous old auditorium. While the audience was sparse, they were absolutely our audience. So much understanding and interest in this film for people who like to think.

Sophia and I felt as if we'd gone on vacation in this Albany bedroom community. The restaurant in town is the LAKE RIDGE which I highly recommned for its mix of standards and contemporary cooking. Lovely setting, not stuffy.

Thank you Sharon Walsh for inviting us. Round Lake Auditotrium invited us to bring SLAP AND TICKLE next summer. We will be delighted to do so.
Posted by Racingdaylightllc at 4:55 AM No comments: 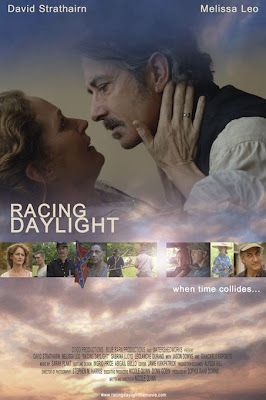 Melissa Leo and Gianacarlo Esposito will be attending the Q&A

Posted by Racingdaylightllc at 4:08 AM No comments:

Posted by Racingdaylightllc at 4:33 AM 2 comments:

We have delivered our film, photos, artwork, and bts to Vanguard Cinema Ineternational who plan to release it in October of 2008. We are proud to be associated with Vanguard. Look for us! Just in time for Christmas ... The perfect stocking stuffer.
Posted by Racingdaylightllc at 4:14 AM 2 comments: