SOME OF OUR CIVIL WAR SCENES:photos by Dion Ogust 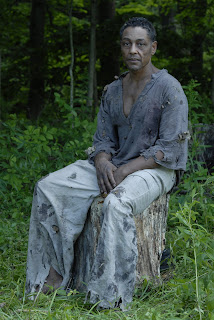 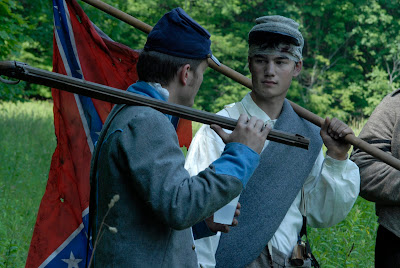 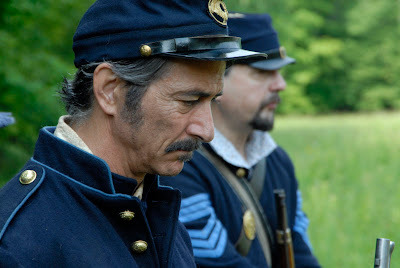 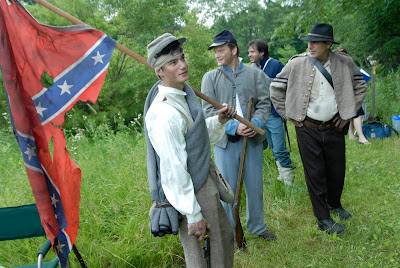 Posted by Racingdaylightllc at 5:06 AM No comments:

In anticipation of releasing a film on dvd with no theatrical release we are growing our audience one screen at a time. We are pleased to be screening in Los Angeles, California, my birth place, though it has been many years since I've called it home.

So if you're reading this and you live in or near the LA area and you'd like to check out RACING DAYLIGHT you will find it here:

We've applied to the IFP for a NYSCA regrant to aid in the distribution of our film-that-could. We've learned so much on this journey, most of it related to optimism and faith in the ability of the little guy to survive in a rowboat with ocean liners on all sides. Our grassroots summer screening tour is about to get into full swing and we're excited about the many and diverse venues we have lined up.

To all of you who have offered up your living rooms and backyards, to all of the film folk who have offered us a hand, we thank you. If you find yourself near the Childrens Media Project in Poughkeepsie or Round Lake near Saratoga, or around the corner from the Film Lounge in London, perhaps at a backyard BBQ in Westchester, Connecticut, Ulster county, or New Jersey come on in and say hello. We will also be found at the NUYORICAN POETS CAFE in the East Village where we hope to hold our DVD launch in the fall.

Tildy Davenport, a local civic leader, has asked when she can buy dvds of RACING DAYLIGHT

"I want to give it to everyone for Christmas." she told me.

We'll be on DVD in the fall and are grateful to the growing fan base who want to share the spirit of love across time with their loved ones. As a collective of artists the only way we will pay our deferred crew is to sell, sell, sell this dvd, and all of the support and encouragment has put wind in our sails. I know, it was a rowboat, but now it has sails too!
Posted by Racingdaylightllc at 4:43 AM No comments:

So we've entered another online film festival; www.independentfeatures.com. We tried Babelgum but asked to be removed because they only ever loaded two of our three films, which didn't play properly, and they had the audacity to promote some films on the home page and not others. Both Sophia and I (mac and pc users) could not load the viewing instrument. Once the festival was up and running we could get no response from any of the coordinators re: our technical problems. Here's hoping this is a smoother run.

We would certainly like our DVD release through VANGUARD CINEMA INTERNATIONAL to have some exposure. Please visit: www.independentfeatures.com view our film and vote often!

Other venues where RACING DAYLIGHT may be viewed in the coming months. Please contact us for details:

NOTHING ELSE TO DO?

I stumbled across a blog which devoted itself to lampooning other's projects and initiative. The nice part is that we nerds get to respond here in cyberspace.

Crappy Loglines I love
This site is for fans of the original Query Letters I Love, and qlil2. This site features a collection of loglines that should never be made into movies in Hollywood. If your logline is up here- have a sense of humour- you need it in this business! This site is dedicated to Managerguy, the Empress, the Sharkies and Pandas.
Monday, July 10, 2006
Henry's Current Record: 0 Wins; 386,254 losses.

MY RESPONSE: This was not a Hollywood film, so we're okay there. A Sense of Humor? I do have a sense of humor, and found none here, only ridicule and 'fun' at other's expense. I'm old fashioned, and as my dear mother would have said, "if you don't have something nice to say, shut the fuck up!" But that was mum.

Racing Daylight
GENRE: THRILLER
An old farmhouse has been in the same family for generations, holding all the secrets in its walls, becoming a portal between the times. What happens when time collides? Sadie thinks she's going insane. Edmund's sure he's being haunted. And Henry, well, Henry's racing daylight.
posted by -j. @ 9:32 AM 5 comments
5 Comments:

At 1:25 PM, Sahve said...
When time collides with what? Finish the thought! However, I like the title. That's all though. I would hazard to guess that the querier liked it too and worked desperately to come up with a plot to go with the title and unfortunately, like dear Henry, came up short.

MY RESPONSE: When time collides with itself, dear. Actually the logline was written well after the script.

At 7:16 PM, Cassie Burton said...
The querier's answered all the questions, so there's no need to see this film.

MY RESPONSE: A film is the visual representation of those answers. And maybe your imagination is the same as mine and you have seen all of the same images in your head. But if not, I suggest you give it a try, on me.

mzdplvfe - There's no way I'd see this stinker anyway.

MY RESPONSE: Ouch! Maybe it's not your taste. But no one died, and at last look there was no olfactory involvement.

At 9:25 AM, BlackCapricorn said...
Its tough to race daylight in a house

MY RESPONSE: We do it everyday.

At 2:45 PM, Taffy Doublewide said...
I think "racing daylight" is just another way of saying "Edmund, you only think it's John Malkovich you're screwing" in polite company.

MY RESPONSE: Ah ... yeah, okay, right, sure, just put your arms through the white sleeves and we'll wrap it around for you.


MY RESPONSE: Check it out if you dare!
Posted by Racingdaylightllc at 4:47 AM No comments: