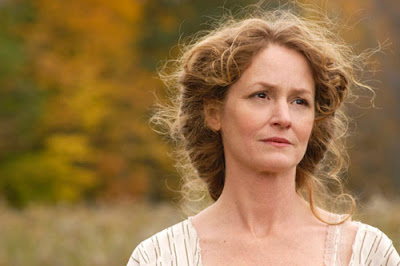 It was snowing. There was a fire in the fat bellied stove, a chubby baby in the basket at her feet, her hands in rhythmic concentration, repeating a pattern with hook and yarn, an everyday industry requiring no thought, so her mind wandered weaving unconscious spells, benedictions Anna wondered where he was ... Harry, where they laid him to rest. She hoped there was a view. Harry liked a view. A hillside on a rainy day when the mist rose up off the back meadow, hovering its invocation over the bee stung monardas and yarrow. Blessing it.

He'd whisper, as if he'd known the sacred words that unlocked those mysteries and measured them out in careful deliberate doses, not to awe, but to admire. He'd mezmerized her always. His small gallantries when no one else could hear, as if it were a secret only they would share. All her life she'd known he was her destiny, she'd recognized him, from somewhere deep inside, the memories embedded so long ago, she can't remember the time or place, just the longing. It took him a while to come around to the truth of it, chastising and chiding her for speaking her truth about them, for saying intimate things that made him wince and think, in that time before he'd come to recognize her as well.

Then he'd seen her. One day crossing the meadow in her flannels and frills, picking flowers, and talking to herself as if it were the most normal thing in the world to hold considered conversations in first person. She'd seen him then, and smiled. It pierced his heart, the simplicity of her, the truth she spoke so darn scary and deep its irritation worming its way into his heart. Before he knew it, her truth became their truth, for he truly could fathom no one else filling him up the way she did with her questions and wisdom, her hand in his.

And then he was gone. All their hopes now hers alone. There was the child, and there was Edmund, gifts from God. Religion an institution she had not abandoned though the Lord had set her such a hard burden to bear, she'd have missed the social life.

Anna pulled at the ball of yarn suspended through the arch of the child's basket. The ball nestled next to the flanneled baby swaddled there, a turtle on its back, all four appendages dancing toward that moving thread, eyes popping at the teardrop prisms off the lamp, and sometimes startled by something unseen just past his mother's head. She wondered if he saw spooks. The old folks always spoke that way, as if the ghosts of the dead were part of living. She had to admit to having seen shadows at the fringes of her sight, her thoughts, and sometimes to hoping it was Harry come back to her. To them.

Jack was a strong baby. The Stokes were sturdy stock. They were cousins to her kin, but then everyone in Cedarsville and its outlying lands had a claim to the founding families. Anna had come from two towns over to visit Stokes Farm with her mother and father one bug nettled day. Someone's wedding, or christening. She'd not wanted to come all that long way by carriage and then a hot walk across the meadow, boiling in Sunday frippery, to the old farmhouse by the pond. She was eight, after all and would have preferred climbing a tree. She'd sat under a one instead, frowning, shooing away the gnats and that pesty little kid Edmund who'd started poking at her the minute they'd met.

Then she'd seen him ... Harry Stokes. He was 15, dressed in long trousers, and she knew she'd known him forever, that they'd made promises, somewhere, sometime, that only she'd remembered ...

The fire popped, boots scraped on the back porch, Anna startled from her reverie. She looked around her to what is, and smiled, ready to greet the man who has rescued her from ridicule and shame, who has taken another man's baby as his own, whom she has grown to love and trust and would never hurt for anything in the world. For all that was Harry was lost, its archeaology buried deep in the lining of her soul, to be mined in another time. This life it would be Edmund, he had earned it.
Posted by Racingdaylightllc at 3:12 PM No comments: