The Many Civil War Draft Riots: Violence From 150 Years Ago, in New York and Beyond 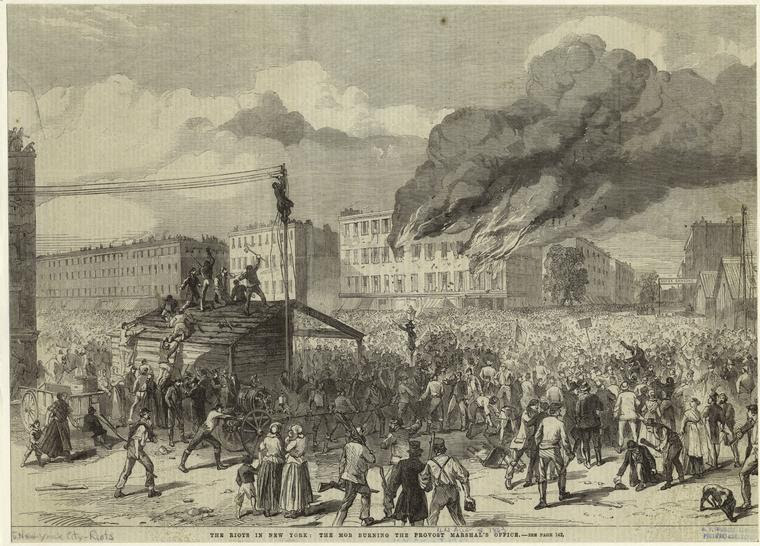 This weekend marks the 150th anniversary of some of the darkest, most violent days in New York City history.
The Civil War Draft Riots set the city aflame for an entire week, starting on July 13, 1863. The weariness of a lingering war, paired with pro-South sentiments held by some New Yorkers, ignited a conflict over a military draft that sentenced working class men -- many newly arrived immigrants -- to a grisly fate.
The Battle of Gettysburg had been fought less than two weeks before, with more than 27,000 New Yorkers upon the battlefield. Many thought the state of New York had contributed enough; thousands were already dead after two years of bleak and depressing battle.
Then there was that troublesome little exemption clause. Those chosen in the "wheel of misfortune" could pay a $300 commutation fee to find a substitute. According to the Measuring Worth inflation calculator, that's about $5,600 today. Look at your bank account. Could you afford to pay that at a moment's notice? 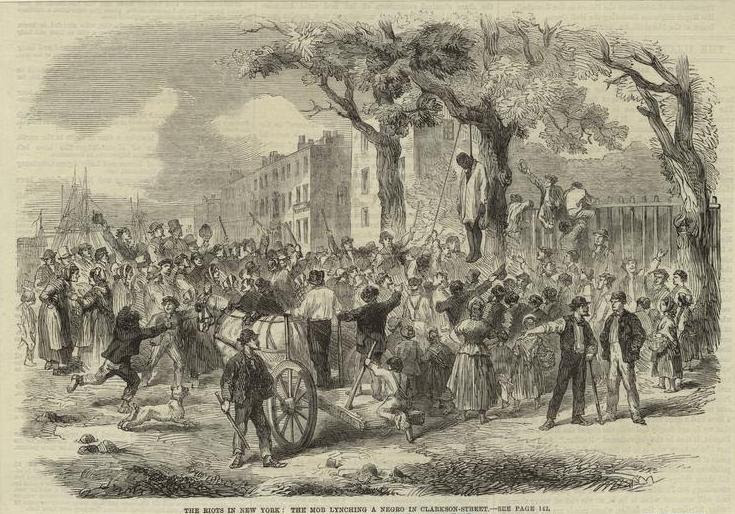 While the first day of lotteries in New York went by without incident, people revolted violently when the drafts resumed that Monday, July 13. Mobs fought the police throughout the week, burning property and attacking black New Yorkers, Lincoln supporters, and anybody in the wrong place at the wrong time.
New York had rarely seen such violence, fueled by stark racism, hysteria and anarchy. Several black men swung from city lampposts; black children narrowly fled a burning orphanage. Mobs nearly killed the superintendent of police, among dozens of others. Millions of dollars of property were destroyed as buildings were incinerated. Parks and streets became barricades. No place was safe.
By that Friday, July 17, the city had calmed down, but its avenues were permanently scarred. It was wretched, impossible day to imagine here.
But New York, back in 1863, meant just that city on the island of Manhattan. In fact, the Draft Riots also reached into those surrounding areas that, a few decades later, would become part of the City of Greater New York.
In the neighboring regions -- the independent city of Brooklyn and the future boroughs of Staten Island, Queens and the Bronx -- local law enforcement patrols were often better prepared to handle disruptions among their less concentrated populations. Even still, the horror of New York's draft riots did spread.
Staten Island
The homes of many black Richmond County residents were torched. According to historianRichard Bayles, "From its proximity to New York City this county could not help but feel every pulsation of popular emotion that disturbed the bosom of the city."
Mobs attacked black shopowners in Factoryville<, surrounded a black church in Stapleton and threatened its parishioners, and burned down a railroad station owned by Republican and Union supporter Cornelius Vanderbilt. A few unfortunately situated Union soldiers at a tavern near Vanderbilt's Landing were brutally attacked by the mob and left for dead. 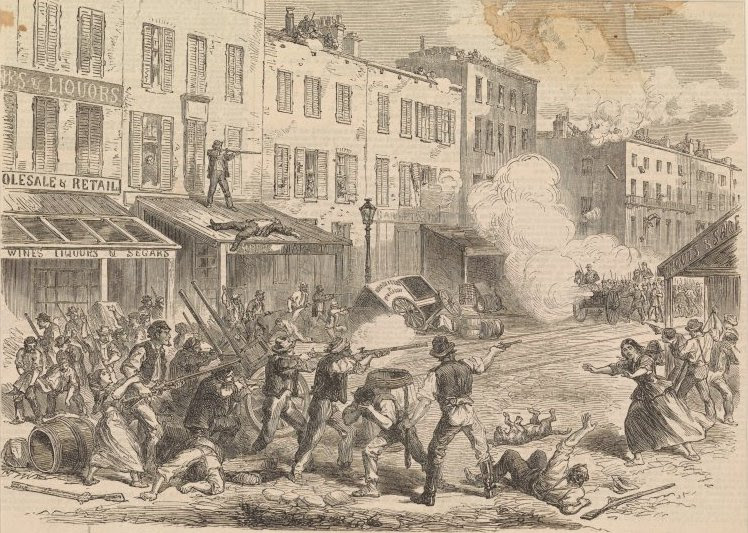 Above: The scene on First Avenue in New York, with rioters barricaded against the military.
Queens
Residents from the Long Island village of Astoria and the farmlands of Sunnyside and Ravenswood could see New York burning across the water. But Queens County officially caught this loathsome riot fever when the draft commenced in nearby Jamaica on July 14.
Riled crowds gathered at dusk and would have torched the whole village but for the intervention of a few Democratic community leaders. The draft office in Jamaica was eventually destroyed, and a number of buildings filled with government property were vandalized.
Rioters stormed one building and stole piles of garments intended for the battlefield. According to an 1882 history of Queens County, it was an apparel Armageddon, the rioters "taking out some boxes of clothing which they broke open, piled in heaps and set on fire. The largest pile, which they derisively called 'Mount Vesuvius' was about ten feet high."
The Bronx
In Westchester County, towns along the Bronx River reacted similarly to their own draft lotteries, with rioters in Morrisania and West Farms destroying telegraph offices and yanking railroad ties from the ground.
However, other localities, like Yonkers, were successfully insulated from violence, due to the entreaties of an especially popular local leader, the Rev. Edward Lynch.  A mass gathering on July 15th in the village of Tremonteventually snuffed out violence in the region.
Brooklyn
Although it was one of the country's largest metropolises, the independent city of Brooklyn never saw the intensity of violence that New York did. Indeed, some black New Yorkers escaping violence in the city fled to the countryside in Kings County, to places like Weeksville.
However the county did see a good share of bloodshed and destruction, particularly in the Eastern District (the areas of Williamsburg and Greenpoint).
The Brooklyn Daily Eagle, solidly Democratic and in quiet support of the anti-draft agitators, had this to say in a July 16 article:

"We could fill columns of the Eagle with exciting stories of anti-negro demonstrations, threatened outbreaks, etc.. So far no disturbance has occurred in Brooklyn which two or three policemen could not surprise [sic]. There has been nothing like any attempt to get up a mob, or create a riot."

That is understated, to say the least. But even through the Eagle's glossy lens, it's apparent that violence never fomented to the degree that it did in New York. This, of course, would be of cold comfort to the dozens of black Brooklynites who did have to flee their homes and businesses that week. 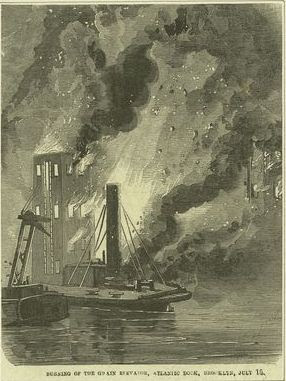 The most dramatic scene in Brooklyn took place before midnight on Wednesday, July 15, with the destruction of two large grain elevators in the Atlantic Basin, in Red Hook (pictured above).
The Eagle's reasoning for the blaze demonstrates the chaos that typified violence in the latter days of the riots. It had nothing to do with racism or with drafts, they claimed, but rather "[t]he fire was the work of incendiaries, supposed to be grain shovellers who recently had some trouble about a raise on wages, and who have always looked with feelings of animosity on these elevators because they dispensed with a large amount of manual labor."
The burning elevators, facing into the East River, made a grim bookend to the burning structures across the water in New York. Luckily, within 24 hours, the riots would be calmed throughout the region.
This was a recap of turbulent events around the New York region that week. If you'd like to listen to a full history of the Civil War Draft Riots, check out our free podcast on the subject. You can download it from iTunes or other podcasting services, stream it onStitcher, or get it straight from our satellite site.
You can find more pictures on this topic at our blog.
This article is a revised and greatly expanded version of one that ran on the Bowery Boys website in 2011.
Images above courtesy the New York Public Library

Posted by Racingdaylightllc at 3:50 AM