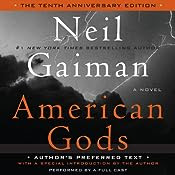 I received an email  from Karen Dziekonski of Harper Audio, Executive Producer of Neil Gaiman's 10th Anniversary Audio book AMERICAN GODS.  She says that the recording was nominated for Audio Book of the Year by the Audie committee!   And also that she gave birth to a daughter in December!!  Welcome, Stella Catherine!!!

Many of you know, because you were kind enough to vote for me, that I won several small parts in the full cast recording of the audiobook, directed by Paula Parker.  AMERICAN GODS is a romp through this New World, with the gods of old on the brink of war with the new.  If you're looking to be transported to another world, one that strongly resembles our own, (but on peyote), where the roads might lead you anywhere, this might be the listen for you.
Posted by Racingdaylightllc at 2:40 PM