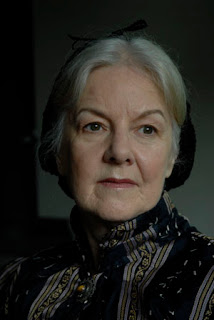 There's a yellowjacket buzzing between the window and the screen. A frustrated hum the soundtrack to the moving picture which has become my life. Every now and then it knocks its body into the glass, the buzz fierce, determined. I could tell him that the fight is futile, but he still has to live it out to its close, where I forsee a new beginning, or what would be the point. The sound of life about to end is romantic, haunting, inevitable.

When did I first slip away? I wonder this when the sun glances off the window glass due east, the way it has on sunny days for the past ... oh ... so many years. I use to hide in my head all the time as a girl. It was safe in there, even if you didn't know what you would find, or where you would travel, if you didn't like it you could always change your mind. Life's not like that. The rules are less malleable and the colors less kind. I learned to do my chores and mastered looking like I was listening in school, then I could wander away at will, to anywhere at all. Maybe I knew then that I would retire here.

Yellowjackets, so aggressive, a barbed stinger made for repeated use. There's a hormone in its venom which acts like a homing device enabling them to swarm their victim, drawn to it, a small army of heat seaking missiles. It's horrible when you're swarmed. Your body becomes a rag doll, flailing and flapping, to make the pain go away. It's a deep hurt, the sting of a yellow jacket. But I still don't wish this death on it. Wasting away between window and screen, all that you can't have right over there.

Meat tenderizer neutralizes the venom. I use to carry it with me in the meadow where there was always a predator to be found protecting his queen. The MSG breaks it down. It works on jelly fish stings as well, Portugese man-of-war. I don't remember how I know this and not the other important things of life like how to talk, or walk, or even that to do these things might be important, to someone.

I was married young. Got caught up in the whirl and swirl of it, its reality only becoming clear at night when that old man would come to me reaking of liquor the points of his beard poking my cheek as he rocked himself on me, in me, those whiskers ... yellowjacket stings ... i was too young ... what was I thinking about ?...

"Get that spoon out of my face, Vicky Plamer!" I'd scream it if I could remember how.

Vicky Palmer, a child I wouldn't let feed my dog. She'll give up soon and go watch her shows. She likes the shows where people are unkind to one another. Where they gather in groups to laugh and ridicule. I liked jane Austen. Same thing really, different costumes. How did it go? Something like "We laugh at our neighbors and make sport for them in out turn ..." nicer language than our contemporary vernacular, but it's just people poking fun at other people. It's when they get the fists and guns and the ... I was the only girl growing up.

I had a daughter. She got pregnant by a boy who went MIA in Vietnam. It made her hard. She never liked me much. Thought I was dowdy. "Provenical..." Oh, baby, who cares? Really? I mean what difference does it make to how we live and die, if it's only skin deep? I always hoped for more. More meaning between two people. Had it once. Brief. Treasured. Beautiful. Something I draw off that dusty shelf in the back corner of my memories every now and again so as not to make it ordinary, eveyrday, but a special occasion memory. A remembrance of a time that was as fleeting and as swift as butterfly wings ... He was a drifter. Came to work for Abner and me one summer. That was all. I never thought of him as a place to run away. He was a destination all his own. Just for that while. A gift I gave myself because I deserved him.

Gentle laughter. Real smart and not afraid to share it with me cause I was a woman or stupid, all the things you start to believe after repeated use. Sun warmed skin on skin in the mountains and valleys of this land I had known my whole life ... to see it through a stranger's eyes birthed it back to me whole, mine again ...

"Zzzz...zzz...zzzz..." A stuggle against the window, now the screen, valiant. I gave up the struggle. It was too hard to participate. Once you lose the use of language folks write you off as stupid, not there. I was still having thoughts and ideas and I was angry. Trying to tell them, him... I was the one losing my mind after all. That's when ... the pills.

That's how the doctors diagnosed my anger. How they controlled it. The drugs take you away for awhile. Further away than I had ever travelled in my head. I tried to stay here, live my life, but staying present took the day, there was no room for creative thought, trying to maintain 'normal' took so much effort. ... Now, normal is this.

Abner died. I sat in my wheelchair at the service. Violet sent flowers. I wonder how old Sadie is now? She was three, no four when she left us. It was nice having a child in the house again. ...

What's that sound? That scratching. "Zzzz ...." That yellowjacket is frantic. Something's changing. Wood on wood. It's familiar, that sound ... I haven't heard it in years. The buzz is moving off ... I wonder who opened the window?
Posted by Racingdaylightllc at 3:39 PM