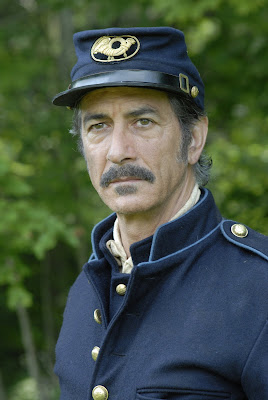 When they found me at Cedar Creek, that battlefield in Virginia, I was pushing out my last breath,

There was pain, in my chest, as if my heart was broken,

They heaved me onto a pile with the dead, and near dead, sure I wasn't gonna make the night, too many others with a better chance of seeing the sunrise. Come the dawn the pile of bodies on top of me had grown, I must have welcomed the warmth, until I decided not to suffocate instead of bleeding to death, the pressure of all those bodies above having stemmed the flow of my life's fluid enough for the wound to close up a mite on its own.

It took me near an hour to work my foot out into the open enough to wiggle it sose someone might notice. I could hear the voices of the medics, and walking survivors, calling for the living. I hoped someone might pass my grave and notice that the meter of my foot was different from those of the twitching corpses. It occurred to me that a regular rhythm, some synchopated measure, might serve,

'Oh! Susanna ...' I tried to hum it in my head, while bobbing my foot in time to the beat, my feeble voice muffled by the cloth and flesh tomb.

I thought back to Anna and me dancing to that song, old man Finkbbinder on fiddle, poncy Billy Ofsteder singing full tenor. I'd change the name to "Oh, Miss Anna ..." and whisper it in her ear all soft and secret. She'd catch her breath, and tell me not to hold her so close, it was getting hot in there ...

My cousin Edmund watching us, ignoring sweet Helly who followed after him like a lapdog.

My foot alone in the air, the rest of me crunched under meat sacks of blood and excrement in what use to be the living, singing that song.

A voice boomed near by. I felt the pile jostle overhead and the pressure give way to a gunsmoke clouded sky. I thought maybe it was heaven.

I woke up again in a dungy hospital tent to some grizzled old man, smeared in blood, digging a horse needle into my chest

There was something in my mouth, I bit down hard, grateful for a place to revenge the pain. Someone splashed me with liquid, liquor by its smell, and then I was gone again until I came to much later in more pain then I knew anybody could have and live. I thought about Anna, she was what I was livin' for. The look on her face when I dragged my sorry ass back and walked her down the aisle of the reformed church we'd been worshipping at since we were children.

I lived for the soft of her skin, the memory of the warm wet between her thighs the one time she had let me in, when I'd told her I was heading off to war. How we'd repeat that bliss after making a pledge before the preacher and the rest, make us some sons and daughters ... there have always been Stokes in Cedarsville. The thought of Anna made me pray to live instead of wishing I was dead. Anna was worth living for.

It took longer than I'd hoped. Everytime I'd get near well enough to make the journey home, I'd push too soon, and land myself in some flop house nursing a fever and an abcess. A spinster lady took me in up in Maryland, or was it Delaware. Said she was only doin' it in the hopes that some other woman was doin' the same for her men folk on the road home from war. It took almost a whole year to make it back to Cedarsville, and when I rounded that bend down Schooner's Lane, named after the ship builder turned farmer who'd settled the land along with the Stokes men back around the time a Henry was king in England, by the time I turned that corner and saw the farmhouse, well, I thought my aching heart was like to burst with joy. I was finally home, almost to Anna ...

HAPPY MERRY!
Posted by Racingdaylightllc at 9:35 AM